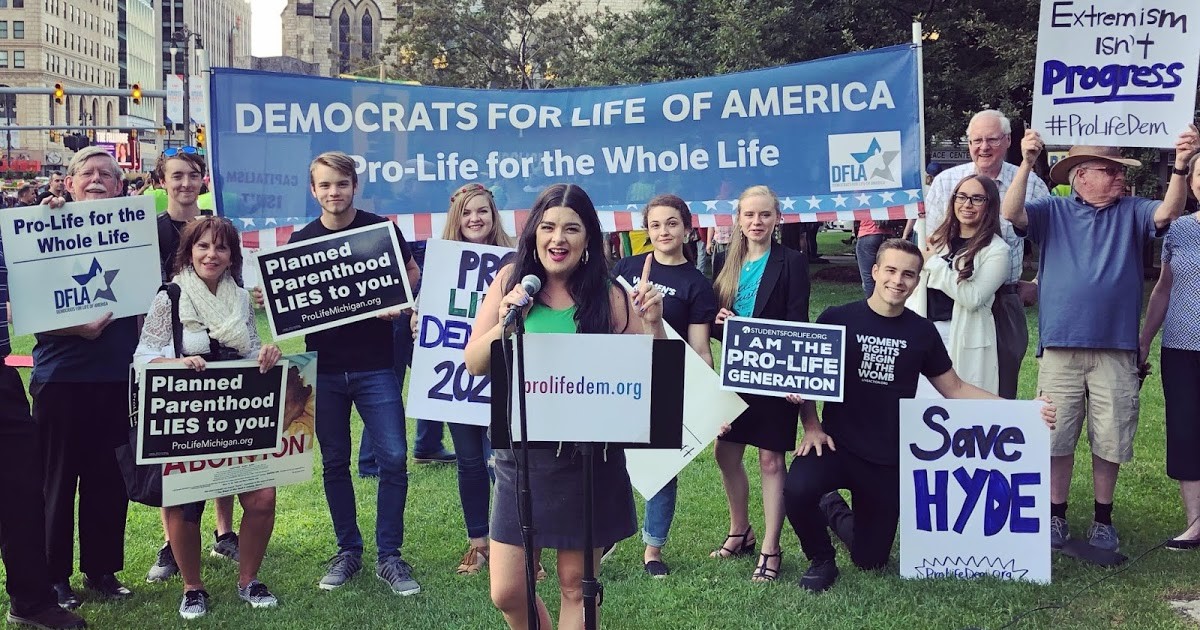 DFLA is unequivocally pro-life. We look forward to a world where abortion is unthinkable.

As Democrats, we believe that the role of government is to defend the weak, not the strong. This applies to pre-born human beings as much as it does to immigrants, the poor, and minorities subject to systemic oppression. We do not believe in discriminating on the basis of size, age, or location. To that end, while we focus on many life issues, we are particularly focused on ending the mass lethal injustice of abortion. This worldview is informed by science, which, increasingly, reveals the humanity of the pre-born child.

DFLA unequivocally supports the efforts of other pro-life organizations to provide legal protection to pre-born humans. We believe that laws should prosecute doctors and clinics who profit from abortion. We support a model of restorative justice as proposed by AUL and Rehumanize, described here. We call on Democratic politicians to pass laws protecting pre-born life.

In particular, we note that many policies that protect human life are already overwhelmingly in accord with majority opinion in America:

Addressing abortion is a high-priority social justice issue that deserves a holistic approach:

Many women who have abortions do so with great reluctance, and many would decide otherwise if they had greater support in bearing or raising the child and if alternatives were available to them. Research at the NIH highlights the reasons why some women seek abortion: 40% do so for financial reasons, 31% do so for partner-related reasons, and 29% do so because they are struggling to raise the children they already have. (Women often cite multiple reasons, so these numbers do not sum to 100%.)

We believe that a stronger social safety net can address some of the drivers that lead women to choose abortion. We also believe that, as a culture, we need to embrace and support women facing crisis pregnancies. This support is embodied in both practical support (i.e., pregnancy support centers) and cultural attitudes. We look forward to a world where women are celebrated for bearing a child in difficult circumstances, rather than shamed for their decision.

While DFLA believes in addressing the root causes of abortion, this action can and must go hand-in-hand with work to protect the human rights of pre-born children. A social safety net is not a substitute for legal protection.

The high abortion rate in the United States cannot be uncoupled from the high rate of sexual violence in this country. 21% of women have been sexually assaulted, while an additional 16% have experienced sexual coercion. Disturbingly, from women aged 18 to 24, the risk of sexual assault is higher for those who attend college.

These numbers are unacceptable and are responsible for a large share of trauma among American women today. This trauma, sadly, is often exacerbated by an unwillingness to believe victims and a failure to prosecute sexual offenders.  Reporting rape is a difficult process, and all the more so given that rape kits are frequently misplaced. Sexual violence is often compounded by domestic violence.

This phenomenon is important to recognize since it informs the outlook of many women, and especially young women, on the topic of abortion. Addressing abortion requires a robust commitment to addressing the epidemic of sexual violence in this country and defending the victims of sexual violence. For example, in some states, rapists retain parental rights, compounding the trauma of women who become pregnant due to rape. Laws should be reformed to protect women and children.

In particular, DFLA supports strengthened mandatory reporting laws at healthcare facilities to identify possible child sex abuse victims, including victims who may be taken by their perpetrator to an abortion clinic. DFLA supports legislative models such as the Child Protection Act, drafted by Americans United for Life, which seeks to ensure that suspected rape of children is reported to the authorities.

This trauma also informs our outlook on how to speak about abortion: with compassion and love, rather than judgment or condemnation. Full-throated support for abortion often comes from a place of fear or personal experience of trauma. We can be bold and outspoken in our support of human rights, while also remaining attuned to the personal history that makes these conversations difficult.

As an organization whose members overwhelmingly identify as feminist, we are proud to support policies that are both pro-woman and pro-child.